THE DEMISE OF NATURAL CHILDBIRTH
published June 13, 2001 in the UK,
"DAILY MAIL" newspaper

baby being delivered by CS surgery

DOCTORS were accused of meddling with motherhood yesterday over alarming rises in induced and Caesarean births. New figures show that only around half of all births are now natural. Childbirth experts said the health of women and their babies is being put at risk by excessive medical interventions which can have dangerous side-effects.They blamed short-staffing, pressure of time, fear of litigation if things go wrong and an 'obsession with being in control' of labour.

Mary Newburn, head of policy and research at the National Childbirth Trust, said: 'The figures in this country are reaching ludicrous levels. 'There is no evidence that the majority of mothers and babies benefit from all the twiddling and tweaking that doctors are getting up to.' The Royal College of Obstetricians yesterday issued strict guidance to limit the number of induced births, which have risen over the past ten years. A clampdown on Caesareans is expected later this year. Consultants have also been told to stop using a powerful unlicensed drug which speeds up labour but carries a risk of rupturing the womb.

The latest Department of Health figures for England show 20 per cent of births were induced, 18 per cent were Caesareans - half of them emergencies - and around ten per cent were instrument-aided deliveries, mostly by forceps. There were sharp variations between hospitals. Some carried out Caesarean sections on a quarter or more of deliveries.

The problem has been worsened by the fact that the majority of women never receive the one-to-one midwifery care which might give them a better chance of a normal labour. Thirty years ago only three per cent of births were by Caesarean section and the World Health Organisation says the rate should be no higher than ten percent in developed countries. The rate in England is among the highest in Europe and the trend has been linked not only to time pressures in busy maternity units but also to career women who are said to be 'too posh to push'. Professor Andrew Calder, chairman of the Royal College's Induction of Labour Guideline Group, admitted yesterday that some Caesareans were carried out for 'social' rather than medical reasons.

But campaigners say women and babies are bearing the brunt of methods to kick-start labour, which include violent pains, complications and depression. Induction carries both a greater chance of undergoing a Caesarean and a risk of womb rupture due to the stronger contractions caused by some drugs, it is claimed. Caesareans carry a higher risk of infections for the mother, leading to lower rates of breastfeeding. Mothers are also 30 times more likely to need an emergency hysterectomy due to postoperative bleeding.

Jean Robinson, researcher for the Association for Improvement in Maternity Services, said: 'Women who are induced often suffer more pain and stronger contractions, meaning the baby gets less oxygen and ends up in distress -- so a Caesarean is needed. 'We are receiving numerous complaints about doctors being obsessed with due dates and refusing to let women go over 41 weeks, when some may naturally have longer pregnancies.'

It has also emerged that doctors are using a cheap, unlicensed drug to speed up childbirth despite evidence that it can cause potentially fatal womb ruptures. More than two thousand pregnant women have been persuaded to take part in clinical trials of the the drug misoprostol in more than 20 Health Service hospitals. Some say they were left in agony from the violent contractions it stimulates - and that they were not told of the risks to them or their unborn child. The drug costs just 18p per dose, against around GBP 18 for newer and safer licensed drugs. It has been linked to 30 cases of womb rupture and eight foetal deaths in the U.S. and one rupture in Britain.

Childbirth campaigners claim misoprostol is being widely used outside the clinical trials by consultants who can prescribe it to individual patients under NHS rules. Midwives at the Princess Alexandra Hospital in Harlow, Essex, and St George's Hospital in Ilford are said to have recently refused to give it to patients after becoming concerned about its effects.

Lecturer Jessica Evans, 38, who works for the Open University in Milton Keynes, volunteered for a misoprostol trial when she gave birth to her daughter at the John Radcliffe Hospital in Oxford last September. She said doctors failed to fully explain the risks and she suffered an appallingly painful labour. After six hours later, anxious midwives delivered a distressed baby by the ventouse method [vacuum extraction], sucking her from the birth canal with specialist equipment. 'It was a terrifying and bewildering experience,' said Mrs. Evans. 'I would never have agreed to take part in the trial if they'd told me about the dangers beforehand. It was only afterwards that I realised the extent to which the baby was in danger because of the method of induction used. That's> the key point - I didn't know at the time and I wasn't forewarned.' 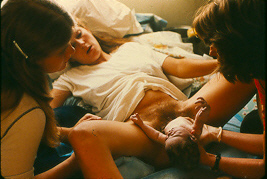